What did we do on Tuesday morning? 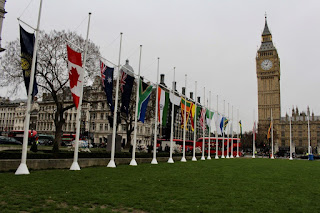 In the morning we got up and got us ready for the day. For breakfast we had some cereals, bread, cakes or cookies, which was very tasty.
At 8 a.m. we met the rest of the class at Mottingham station and took the train to Charing cross. From there we walked along the Thames to the Houses of Parliament, where we saw the Big Ben. We walked on to Westminster Abbey and saw many statues of former prime Ministers and Nelson Mandela.

After taking photos of all the sights, we decided to take a class picture in Front of the Houses of Parliament. Then we took a walk around to discover the area around Westminster Abbey and there we found a house which looked almost like Harry Potter’s house.
A bit later we decided to have a break of 1 ½ hours in Oxford Street so we went there by double-decker bus. We did some shopping or went to a restaurant to have lunch. When we met after our break, we took a bus back to Trafalgar Square. 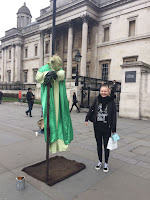 At Trafalgar Square there were many street artists. We saw for example two flying Jodas. We took some pictures with him and the poor teacher had to pay the guy. Then we went to National Gallery. There were paintings by Picasso, Van Gogh and Monet. We had our packed lunch in the spring sun. It was a nice first half-day in London. 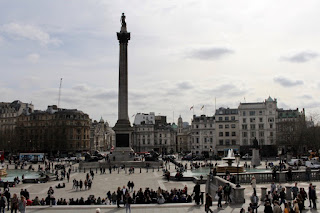