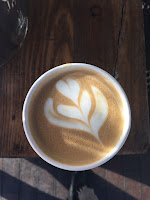 The third day in London started with delicious wonderful coffee which we drank near the underground station “Canary Wharf”. We picked a meeting point and went for a coffee on our own. After about an hour we met again and started out to Tate Modern. We took the underground again but still had to walk for about 10 minutes from the station to get to Tate. Tate Modern was once a fuel power station, in the centre of London, which was rebuilt in the year 1993 and opened as an art gallery in 2000. It is part of a gallery network of four galleries in three different cities of the United Kingdom. 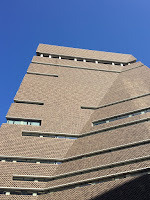 When we entered the Entrance Hall we were really impressed by how big it was but also by the huge number of children that were playing around in the hall, making an unbelievable noise. Obviously, they were a school group because they were all wearing school uniforms. After deciding where to meet again we parted and went through the museum on our own. In small groups, we ambled through the different exhibitions and took a lot of pictures. The building was so big we nearly got lost in it and another negative aspect was that even though Tate Modern had free entry, there were a few exhibitions that you are not able to enter without buying an extra ticket. From the free exhibitions only a few exhibits were interesting in our point of view. All in all, we must admit that we expected it to be a little bit more interesting than it actually was.

After our stay at Tate Modern we decided to go to Camden Market, but before we left we had some time by our own. First, we went to the little shop at Tate and looked for some interesting books. It seemed like there were a thousand books about artists, musicians or films. I wasn’t looking for something to read because I knew I couldn’t decide what book I wanted the most.

After our short time at the shop we went outside to get some sunshine. It was a very beautiful day so we sat down on the ground and had our packed lunch. While we were sitting there a musician with his guitar began to perform old songs and everything seemed quite perfect. We were looking at the famous “Harry Potter”-Millenium Bridge and crossed it after our break and went to the underground station.

Before we went to Camden Market we walked through a lovely quarter to Primrose Hill where we had a gorgeous view of the city. We stayed there for a while and enjoyed the sun. Then we walked down the hill along to Camden Market.

Written by Sara Gärtner, Valentina Gruber
Posted by Unknown at 19:14